Has anybody used Vuo with 3D objects? I struggle to even load a simple .OBJ. They made it just as difficult as QC… where there was - thank god - people like vade who made this accessable for the rest of us.

When you make a new composition, make sure that in Protocols you change it to Image Generator so you can output it to VDMX. Than just simply drag your 3d object onto canvas and connect as seen on the screen shot. I usually use .obj or dae, I think it works with fbx too maybe, but I never tried.

Thanks for that! Where is Allow First Event connected to on the left side?

The Vuo composition you are trying to load (/Users/Desktop/3d.vuo) doesn’t support the Image Generator protocol!

Allow first goes into Time input, you got that correct.
Its strange, when I tried to Run yours, the Render window doesn’t come up. S I did a new file from the scratch, ran it and it worked.
You’re on 2.0.2 right? Strange thing about it is when I change it to Image generator protocol I get that yellow screen on left saying Im. Gen. while on yours not. It’s like on yours for some reason it’s not acknowledging the Image generator and than its not loading it into VDMX. Looks like some Vuo thing, but not sure what it is.
Maybe someone from Vuo community? Try to ask on Vuo forum why it doesnt show the Im. Gen. protocol 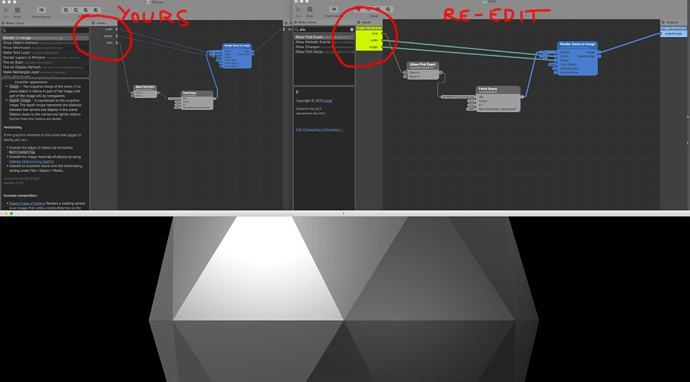 Also, you can notice on yours the connection cable outputting image from Render scene is kind of thin, while on mine is thick. It’s like its not actually outputting the image. 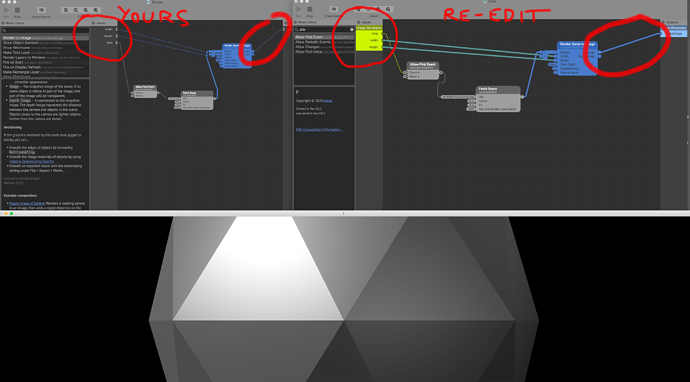 Do you have Vuo Pro?

Well, I guess the problem I have outlines my problem with Vuo pretty good. Not really wanting to throw money at this company when this is so inconsistent for „easy stuff“.

Wondered about the thin lines as well… could you maybe send me your composition?

edit: ah okay… got it… need to right click on Inputs and change it to Image Generator

Yes, Im on Vuo Pro. Correct, right click on it and change it or go to Edit-Protocols-Im Gen.
You got it running now?

But I am struggling now to see the published inputs inside VDMX - any tricks there?

Edit: Ah I see… I need to use known variables - like rotateX, rotateY … translateX … and also distribute the single values in to a matrix / array again

Could you help me figure out how to combine the single input values to an array and feed it back into the 3D scene?

I guess I have to add another node which combine the three rotateX/Y/Z to an array and then feed it into Transform 3D Object? 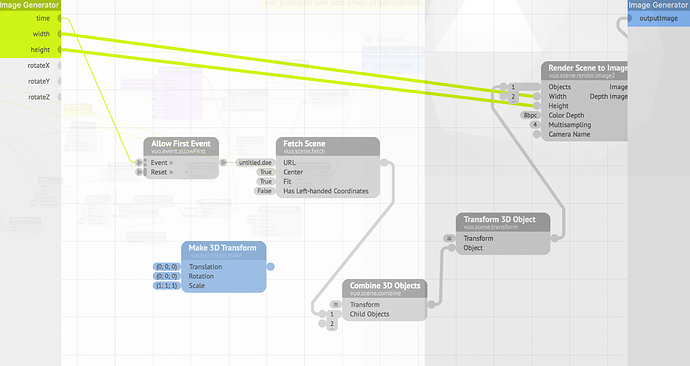 vuo.mov.zip (1.5 MB)
Yes, you wont see any ports untill you publish them.
This video should help you how.
Just take a cord from rotation or scale and drag onto the left side of canvas and drop it. It should create a Input automatically. Clicking it you can adjust it the way you need. If you right click you can go to edit details and choose your min/max. Vdmx will then respect these values.

I guess I have to add another node which combine the three rotateX/Y/Z to an array and then feed it into Transform 3D Object?

I’m not sure what you mean by that? but to connect your transforming node you have to use than combine node. Is taht the question? 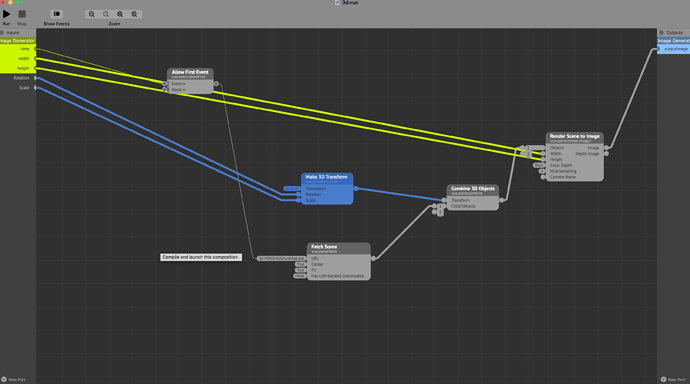 If you want to use a separate variable, use the Make 3D point node and publish only the one you want. Hope this helps. 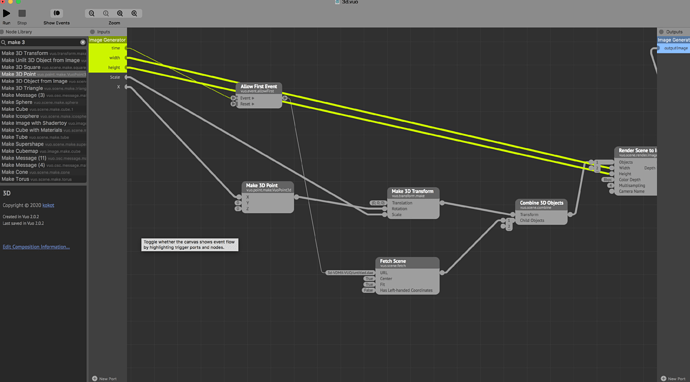 Are you sure your Scale input will work inside VDMX? Afaik you can’t use that with VDMX since it would need to input 3 integers - and VDMX only does one (per slider) - so yeah I meant that. The Make 3D Point helps I guess! Thanks!

@id_mora do you have any knowledge how to integrate anything else with 3d models? Lighting? Texturing? I feel like the team / community of Vuo should start documenting the features a bit better.

Sadly they didn’t inegrate baked animations …I was really thrilled to try it out until I saw this won’t be implemented in the near future.

You can add lighting directly in Vuo…Make ambient light…etc or you mean lighting baked onto the model directly?
Texturing is easy, I dont know what 3d suite you use, but I’m on Blender and you export your model directly to dae with the texture. Or to .obj and than add the texture in vuo. I recommend use the textures 1024x1024 or even smaller. I noticed anything above like 2048x2048 makes vuo go slaggy.

About the baked animations, a pity, its been on Quartz for like ten years. There is a feature request for it in vuo forum and I have been casting all my votes on it since 2015 hahahaha. It’s got one of the highest votes but they’re just not implementing it. So I dont know.

I tried to add lightning but …failed again. All the examples only show how to do it with generated 3D inside Vuo. Could you tell me the secret sauce to success?

Possible to use displacement/bump and stuff?

The lack of animation is really ridiculous. I guess it‘s also not possible to warp/morph vertices inside Vuo? Those are the features that would make me think about investing my hard earned money into this…

To add light just choose the light you like,Point light, ambient,spotlight…etc.,activate it to Time input and than drop it to Objects input ad that shoul be it. Than just adjust the strength in Brightness 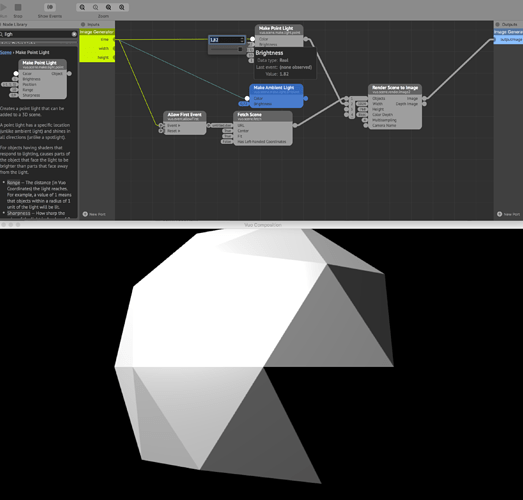 Yes, it would be nice if they would add the possibility of loading the animated model. I have loads of stuff done in Blender, but this way I’m limited to use only the still model.
By warping/morphing vertices you mean to morph 3d model itself? there are few nodes that can give your 3d model ‘certain life’ like Add noise to 3D object, Ripple 3D object, Displace 3D object with image…just play around with all the 3d nodes to see what they can do. 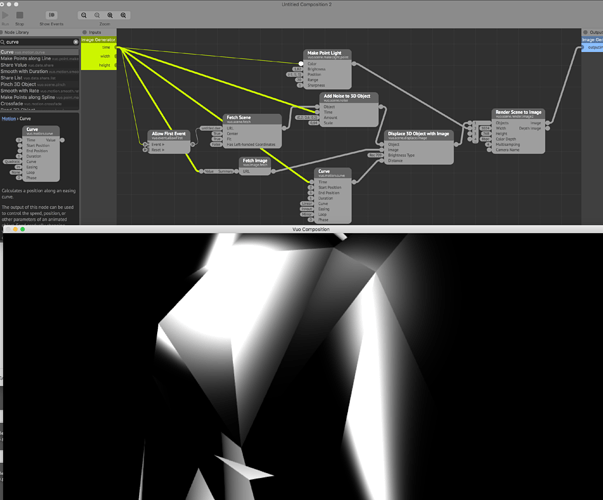 Ah, okay nice! Thanks - will try right away!

This is actually quite fun! Thanks a lot for guiding me @id_mora - the culprit I was running into was the missing connection(s) to time - again. The rest is a breeze now

The 3D FX/modifier inside Vuo are all a bit Lofi … but well … can’t expect a Blender realtime engine I guess… (or can I? looking at you eevee

Render speed seem also pretty reasonable for simple shapes. Got Vuo, Blender and VDMX running at the same time and get 60 fps for 2 objects + lots of FX (MBP 16"). Love it!