Hey.
Got a client that’s asking if I can make a setup with one computer at the stage running Ableton Live, and another computer at the FOH running VDMX, so he can be able to push the button on the stage starting the music track while also sending a signal (OSC I suppose?) to the FOH computer to start the visuals, and do so with every song. I’ve never really used Ableton. Do you guys have some smart ideas on how to easily set this up?

Hi,
midi thru ethernet could be a solution.
OSC is cool but not native in Ableton so you have to use M4L which is not so stable and easy to use (https://www.ableton.com/en/packs/connection-kit/)
Currently running both apps on one cpu but when I can will split on two cpu so will have the same set up.

I’m using LiveGrabber 4.1 on my Ableton Mac to sync with video on another Mac and it works well!

The long answer is ‘both apps are extremely open ended, and both are potentially used differently during the studio (sketching, recording) vs live performance, and there are some edge cases where maybe it is a little complicated but also there is a lot of room for some amazing stuff’

Depending on how they use Live during a performance, they can either directly trigger the slots, or they can place them in specific rows such that they get activated along with master triggers.
(and of course where things can get kind of fun is that you can have any number of these extra tracks… within the limits of MIDI channels / messages of course…)

In this gif I have Live running on the same machine as VDMX, so I can use the ‘To VDMX’ option for sending MIDI, keep reading for the network side of things.

This app will take any incoming MIDI and send it as OSC messages – copies of VDMX on the network will show up as targets, or you can manually configure the IP / port.

You can also use this app on the receiving end to convert back to MIDI.
(this is handy with other apps, but though do note that VDMX itself can receive MIDI messages over OSC, as MIDI messages are technically part of the OSC spec itself and we support that, so you can probably skip running the app on your local machine…) 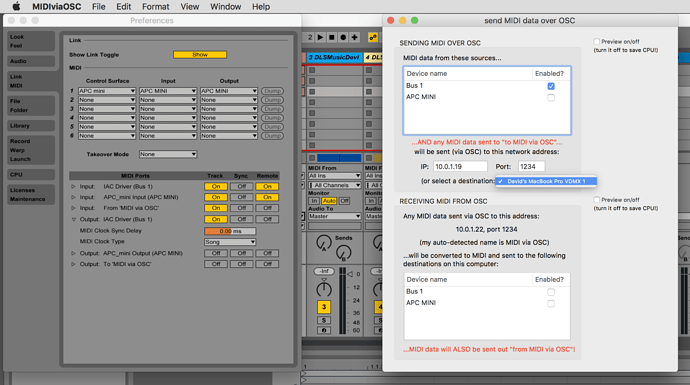 Hope those are some useful starting points!

I use one extra midi clip / column to send MIDI trigers or something else. Easy And clear solution.

Thanks for the answers. The musicians were in a hurry, so we went with a simple midi-track in Ableton triggering the clips in VDMX via the IAC Driver.
Though we figured that there is a small delay… The editor, that made the video synced the video entirely to the music, (I’m only helping the guys out with a durable setup because they were in a hurry) and we now see a small delay in the video. I tried setting up something with the timecode plugin, but i can’t seem to get it to work probably. What I would like is, trigger the clip from Ableton, but then be sure that both the music from Ableton and the video in VDMX is completely in sync (maybe using timecode in some form?)
Again, thanks for the answers. Really appreciate it.

Another useful basic trick, which I like to use for a quick setup, is to along with note values also send a ‘sync’ signal as one of the envelope / control value MIDI outputs from Live that goes as a simple ramp from 0 to 1 over the course of a song. Pitch bend works particularly well for this since it is 14-bit resolution.

With regard to timecode, there are a few different options and a couple of details to keep in mind.

One thing is that ‘timecode’ as a concept usually refers to time in SMPTE clock time. When someone is performing with musical software, such as Live, time is kept track by the number of elapsed measures / beats / sub-beats; the amount of elapsed time in seconds is going to vary depending on the BPM, which itself may vary during the course of a performance.

Live supports sending MIDI clock, which can be used to set the BPM and measure time of the Clock plugin. Within the preferences for Live under MIDI, there is an option to adjust the ‘clock sync delay’ on a per MIDI device basis which may help with the latency issue, at least with regard to clock timing?
(similarly, if the musician doesn’t mind adding a few ms of latency to the sound output, there is an option in the Live preferences under Audio for adjusting the ‘driver error compensation’ that might help?)

With regard to receiving SMPTE clock, the Timecode can work with two different formats that are relevant here:

Here is a tutorial on timecode that might be of interest,

Introduction to The Timecode Plugin

When designing preplanned shows and working alongside other software, one of the common tasks is keeping the timing of everything in sync. Within VDMX there are two main ways of working with time – the Clock plugin  which is used for working in...

Thanks for the good answers!
Okay now I’m trying to get it to work with LTC with an audio file in Ableton routed to VDMX via Soundflower. By now a clip is set to be triggered when Timecode starts, but I get a bit of flickering in the beginning (see ref.*), and that seems to prevent the clip from being synced with the timecode (approx. 1 sec. delayed). So I was thinking about a solution that would make the clip/video follow the timecode in min., sec., and milisec? Can I somehow use the data from the Timecode plugin as the progress of my video? I was able to trigger the clip using af CS button controlled by the timecode to trigger when startet, but also here, is a small delay. So I would like to synchronise time in Timecode and in the videoclip.

I’m working with preset and when you hit to the next preset there’s always a little latency so to reduce it
I saved every preset with the media playing (video, shaders, images … )
but still have a few ms of delay

What do you mean by “saved every preset with the media playing” ?

in the work space editor you have a preset tabs
it allows you to save the current set up of your vdmx project and then create as much as you need preset
I do : 1 song = 1 preset so I just need to hit the preset to load everything

Ah I see. Thank you.

Presets tend to lag if you’re trying to do too much at once. Particularly if you’re stressing your computer with large videos and add/removing a bunch of effects.

HAP codec definitely helps if you’re not using it already.

Yes and an other problem is that when you are using Ableton link with VDMX
and have automation on clip launch in Ableton (like go to next after 8 bar) and you switch from one preset to an other, the launch automation is loosing is count and directly go to the next clip :/
I think it’s a problem communication between Ableton and VDMX

so I left the Preset set up, which is pretty cool by the way.

Any tips on how to sync this up? I can’t figure out how to get VDMX to play correctly from LTC from Ableton. The signal is coming through, but the video just flickers in the beginning forever.