Probably not the most popular topic…

I’ve been a Mac user for a really long time and as a visualist/technologist/developer I’ve been saddened to see the direction that OSX/MacOS has been heading. In particular there have been a lot of promises that have failed to be fulfilled to pro users on the hardware end, especially when it comes to graphics. For the first time in a long time I’m due for a computer upgrade and its gotten to the point where I don’t think I can buy a Mac that will do what I want it to do anymore. With options like the Razer 15 out for over a year now pushing mobile graphics power I’m wondering, will Vidvox consider making a PC port? This of course would be no small task. That in mind VDMX is in my opinion one of the best real-time performance tools available and I’d hate to give it up.

Side note: While a dream, VDMX on Linux? … just throwing it out there

Hi,
They were already a discussion about that question.
And the answer is maybe one day but as you said it would take a long time to do it

Doing a straight port of VDMX5 as it is now isn’t really possible.

What I can say is that over the last year we’ve been investigating the best way to approach x-platform development and we have started to convert some of our low level libraries so that they’ll run on other OS’s.

Here is one of the very early ISF tests running on Windows a few months ago, 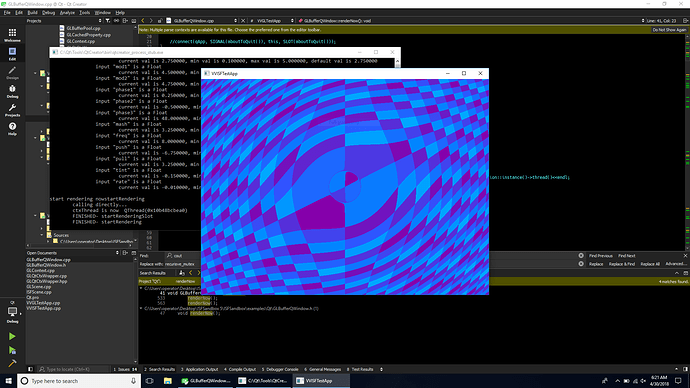 From there the next goal will be to recreate some of our basic freebie apps, such as the ISF Editor, as a means to test those codebases. This actually comes at a good time because even on the Mac we need to start moving away from OpenGL over the next few years, so we are using this opportunity to also start our transition to Metal / Vulkan. At that point we’ll be able to start on VDMX6 – we aren’t entirely sure what that will look like yet, and we may take some time to work on other smaller apps during that process…

PS Z, I think the thread with the question got deleted when we purged the old forum posts.

This thread is such a rollercoaster! But L4Z3RC47, couldn’t agree with you more. Everything you said in the op… spot on. I’ve been struggling with eGPU’s for coming up to a year now, to squeeze out of mac what windows has been rocking for years. Yes, not without a lot of pain and hair pulling on the windows side… to be SURE. Nothing is free, including real time 1080+ canvases… But, the PC hardware, when you can get it to chooch proper… Mac has a lot of catching up to do.

I’m in the same boat. My mid 2015 maxed out mac is running on his teeth to run the resolutions I want. And, my boss does not want to buy me a new 4500 euro costing machine… and the USB C ports… just no. A fully loaded 15 inch MSI with s 1080 on board is still a lot, but more connectivity and overhead.

There are a lot of legit gripes about the Mac these days, but for the most part I am a big fan of the newer MacBook Pro series and I think USB-C is pretty great.
(as always there are some growing pains when switching between port types, but I’m a video tech for like 15+ years now, I am no stranger to dongles, adapters and expensive converter boxes, it comes with the field… and to that end I love having 4 ‘anything’ ports on my computer)

I’m with you on the ports to a degree. I do love the “everything” nature of thunderbolt 3 (easily confused with USB-C vanilla which is not nearly as useful) however I do lean towards the tendency of PC manufacturers to gradually phasing over ports, eg, give us 1 thunderbolt anything port, 2 USB 3, an HDMI, etc… I also really miss MagSafe… That being said, Mac’s choices still do make a lot of compromises and have a heavy price (again, been a mostly pure Mac artist for ~ 12 years now) for what you get. Maybe its just the fact that they’re still stuck on AMD graphics when NVIDIA still has the market mostly cornered for compute processing? Example: I was playing around with _kzr 's Ngx today (https://github.com/keijiro/Ngx) which pretty much won’t run on a Mac and even if it did it wouldn’t have the power behind the cards to get a decent frame rate. One of the new Razer 15 on the other hand can handle it fine. I certainly love the Unix based environment a lot more than Windows still as an OS but thankfully those lines are starting to blur a bit more making the Win transition not so bad (or hackintosh it

Anyways… I guess all of this is to say, I love Apple, but when it comes to performance these days were reaching a point in the industry where lugging around expensive external boxes is becoming less and less necessary as the computers we run our software on is capable of doing more and more on its own. This is even more the case if you consider all of the capabilities that a desktop machine has over a laptop. I only hope one day that all of the amazing creative software that has made MacOS so great for artists over the years can bridge the gap and free us to make a choice on the hardware we want to run.

Just bought a MSI GT63 with NVIDIA 1080… it runs GTA5 on 4k… verry smooth. It doesn’t feel as solid as my macbook pro, but in runs like 1000 times faster. I design lighting rigs, rendering a lot of lights with smoke, GPU at 100%, mouse still moves. ISF editor runs freat!

So keep up developing. I’m in for beta testing.

I miss Quatrz, ISF, VDMX, Logic… and max Jitter is a pain in the ass to get into after a long time…