Can someone test the attached Vuo FX in Big Sur 11.2.3 (its a simple Greyscale FX). None of my Vuo FX are working since updating to Big Sur (MBP Intel). 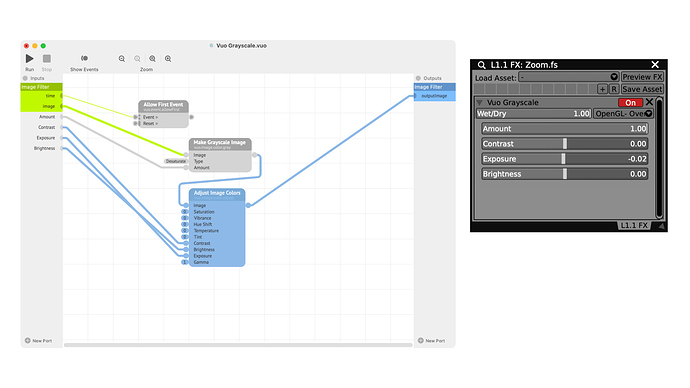 After you updated to Big Sur, did you completely reinstall VDMX or did you let it float over from the installation. (It’s usually good to fresh install after an OS update, imo).

On my MBP at the moment, need to test it on my studio machines. The MBP was an upgrade (not a fresh install of the OS). I’ve moved the Vuo plugins and FX out of the VDMX assets folder and tested it with a single FX and plugin. Both crashed VDMX. I will see if I can replicate it on another machine tomorrow. All my machines are on 11.2.3 now and Intel. Will do a clean VDMX install now on the MBP.

No joy, I renamed my ~/Library/Application Support/VDMX -> VDMX_bak, reinstalled VDMX and added the basic Grayscale Vuo FX. When I select the Vuo FX VDMX hangs. Will test on a second machine in the morning.

I got the same thing. Beach ball hangs after a few seconds. I’ve been having an issue related to VDMX integration with Vuo so I tested several things.

VDMX won’t load any Vuo compositions made with newer versions than 2.1.2. but as you might know, Vuo 2.1.2 doesn’t work property in Big Sur. And if you have Vuo newer than 2.1.2 installed on your Mac, VDMX won’t respond no matter what version of your Vuo composition. It just simply doesn’t work. For now, it seems the only way to walk around is exporting Vuo composition to FFGL plugin.

It’s been over 5 months since Vuo 2.2.0 has released, 8 months since the first Big Sur beta. VDMX needs an update.

been over 5 months since Vuo 2.2.0 has released, 8 months since the first Big Sur beta. VDMX needs an update.

Oh this is great news… waiting desperately for an update, there’s also an epic bug where VDMX doesn’t remember MIDI mapping with Vuo files… did they confirm one is coming???