I’m looking for a way to create an effect when the same clip is tiled (in this case tiled as 6 columns left to right) where each tile is playing a set about of time behind the previous on.

Is there a prebuilt effect that can do this or does anyone have an idea of how it could be created with the effects we have?

The closest built-in effect would be MultiFrame3x3.fs which is a grid rather than columns but the filter is an ISF so it could be modified. However shifting the time by buffering in a single shader is not a great solution, and you wouldn’t be able to do more than a few frames offset. If you do try this filter be aware that the ‘lag’ is coded to work with 60fps input, anything less will look really choppy. A better way to achieve this effect would be by building a multi-layered composite and offseting the time in each layer.

There’s the old FX / Misc. QC / Delay.qtz which would work. As doctormojo suggests I would say it’s be better / quicker to just create a layer group. Use one layer as a source and create 8 copies. I made a quick example (Vimeo link below), in my version Group 1 is used as the source for the tiles, each tile has a delay FX. I’m guessing you could easily recreate the Delay FX in something other than QC or even a custom FX in something like Vuo. 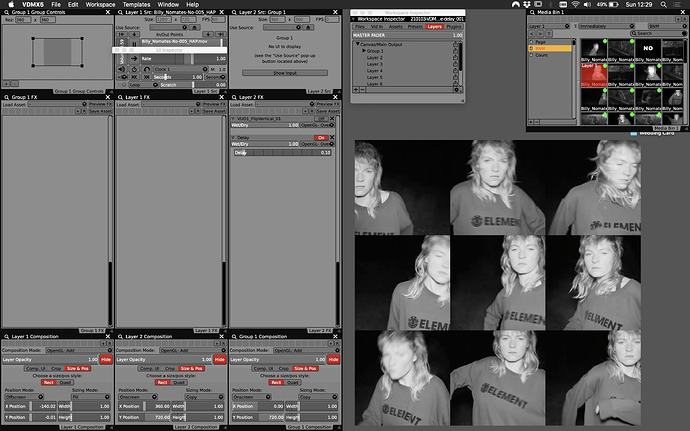 Actually my example may not work the way you want as when the video source changes the change cascades down. If you want all the tiles to change at the same time I’m thinking it would have to be a single layer and custom FX. Although the cascading change looks cool and might work for your project.

That is kind of what I had in mind and a great solution. I’ll have a play and see how I get on.

I don’t mind the cascading affect as the source clip will probably be reacting / synced to the beat of the music.