I’m returning to VDMX after a long break. Was pretty active on the forum back in 2004/2005 beta testing GRID. Life had other plans for me an so I took a break from tinkering with live video… anyway here I am. Learning my way around VDMX5. I’ve spend a few weeks building a template that fits my needs and I now have a question that I’m struggling to find an answer to… so here goes.

I want to use a MIDI controller as much as possible. I wanna avoid using the mouse where I can as it slows down the performance. For the most part I’ve been able to do this and assigned various controls to my template. I can trigger clips and control effects and compositing. Happy days.

What I’d like to do is access the contents of a pop up via an endless rotary encoder on my MIDI controller. In this case it’s the pop-up for the pages in the media bin and the encoded is on a Traktor Kontrol F1.

I’d like to scroll through the list with the encoder but can’t seem to work out how. I’ve tried the various options but the closest I’ve got is for it to select one specific page.

Any tips of pointers would be ace. Thanks

Here’s what I’d do: If Media Bin 1 has ~5 (edit: that’s a totally arbitrary number) pages, and I want to use the F1 encoder to select the active page…

If there’s a faster method, I’m all ears.

Cheers. That makes sense now. I think I missed the turn on Invert so it was just repeating the up command.

Will set this up later.

Another related MIDI question, can the current highlighted clip in the bin (the playing clip) send it’s status out via MIDI? Would be cool to highlight the clip playing on the pads of the F1 on Ableton Push.

I think the F1 pads need to be set to Indexed or at the least a non-HSB color mode. It’s been a minute since I last messed with that setting. Have fun!

Cheers for the heads.

Will check that out this afternoon over a cup of tea as it wet outdoors.

So I got the menu scroll working… sort of to start with. Adding this for anyone else who might find it useful.

Not having much joy getting the clip status sent back to the F1.

Followed the steps in the Tutorial and have the F1’s button state set to Indexed but it does not update the LED.

Trigger all set (and they all work as expected): 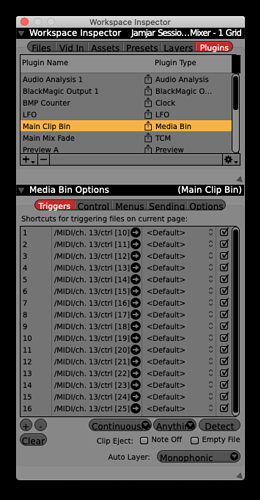 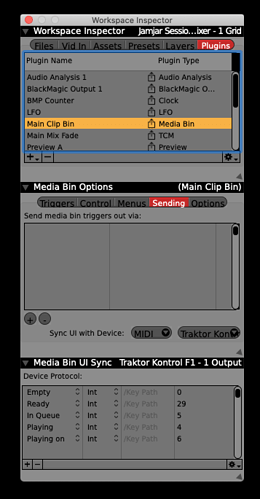 Ohhh, I see what you mean. I poked around a bit and it seems like the Media Bin UI Sync won’t send if your triggers are CC messages, because it wants Note messages so it can send back velocity for color data. The default F1 template sends CCs on the pads.

My usual F1 template uses notes on the pads, which threw me off at first until I went back to the original mapping. I checked this behavior with a Twister, same deal. Guess I ran into this ages ago, remapped, and promptly forgot about it once it worked

Thank you. That works. Had to also swap from Toggle on input to Val on input

I now have the F1 ticking pretty much all the boxes I had set out to.

Thanks again for the help