Is there an effect to reduce the frame rate / posterize time (as after effects calls it) - with out changing the length of the clip / for live sources?

Perhaps I missed it, but I only find effects to blur btwn frames. The best work around (kinda) is to use a step sequencer to turn on/off a freeze frame effect. Which isn’t exactly great and has limited speed control options at best.

With video files I know you can just play them slower. Basically trying to replicate a video feedback set up I had with a hardware mixer and a camera - reducing the fps on the feedback input to keep it blinking out of control.

I think you might have more control / options if you use two layers and toggle between the original (overlay) + copy (Add). That way you could add opacity and timing to the layers and FX. Note: the gif output is not a fair representation of the freeze/blur the original video is much more fluid.

thanks for the suggestion. I am not following what you are suggesting. The first step seems to be what I am already doing - using a controller to turn on/off a freeze frame.

I am not looking to blur btwn frames. Just reduce the frame rate. added gif ref of what I am looking to do.

I initially thought this would be something I could figure out in quartz composer, but all the google results are discussions about how qc fps is too low.

Seems like in isf or vou - the steps would be simple(?) - video source, math toggling between 1/0 to pause unpause video frame, and a slider to control speed of oscillator.

but isf code is beyond what I can cobble together and vou is more $ than I want to spend given my hack solution I have already.

Ah, now I get what you mean. Just stop the play head and add a data source to the jump forward button (say Clock 1/Every Beat). Set the dropdown to Frames and adjust the timing for your application. 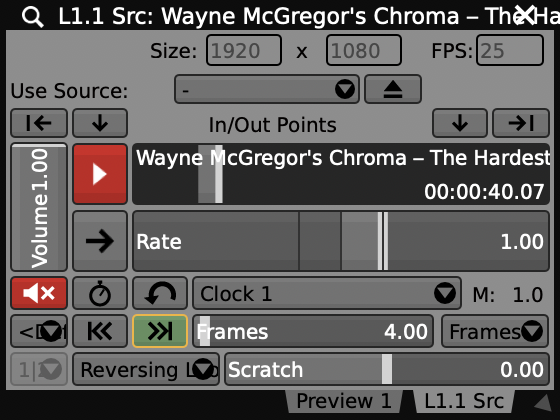 thanks again for the help.

live sources dont have a play head.
This also wouldn’t work on one of the live generators 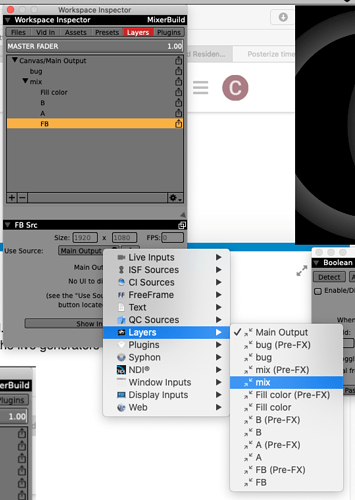 I think you will have to do that in-camera / hardware or via a third party framework and then Syphon in to VDMX. Sounds like you are looking for a slow shutter cinematic FX? You could go down the old school route and use a spinning shutter in front of the camera lens with an Arduino to adjust the speed. Way more authentic if that’s the look you are after.

I just found a FX called Micro Buffer.fs that does this. If you don’t find / have it, message me.

ah, that does it. Thank you.

The controls are super weird. Not sure why there is 3 buffer controls and 4th global control. I think I tried it before but forgot because of the name of the effects.