I am stress-testing routing interally (no LAN or WIFI connection to any other device),
and have a pretty hard time running NDI here - as soon when streaming from VDMX
(receiving on any other application or NDI Monitor), or also just sending the layer on NDI plugin (without any receiving app active), the framerate drops of 1/2 or more, while GPU and CPU
are definetly NOT at full load.

Same drops experienced when receiving NDI from another computer via LAN.
From the NDI MONITOR application it seems like its trying to send video to 240 fps…
Anyone has experienced such thing by chance, or anyone knows how to fix?

Thankss
All the best,
F 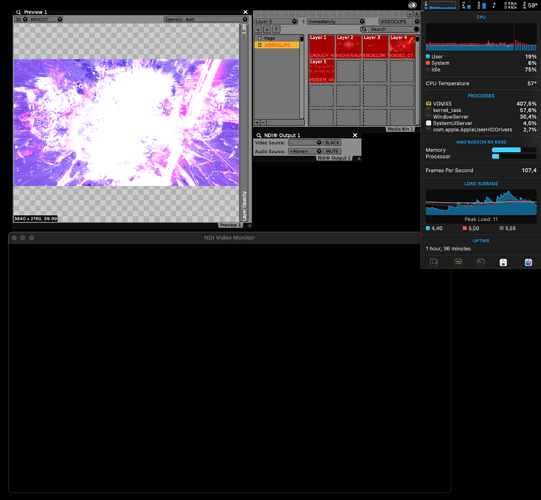 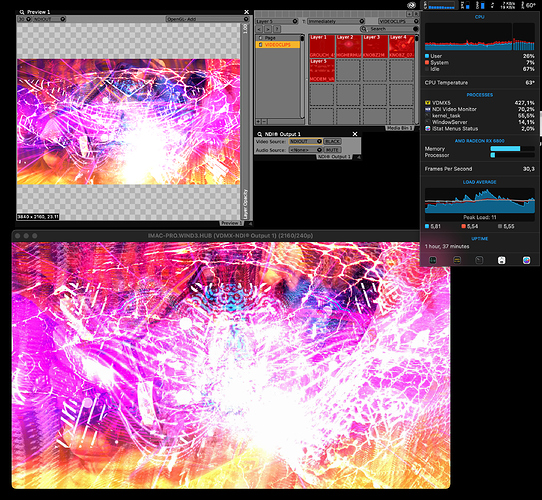 I noticed in the first picture, the NDI out is showing 60fps (59.99), but in the second picture which looks like it maybe has effects is getting 20ish fps. The actual FPS are at the bottom of the preview window. Are there effects on the second picture?

Also, when I was streaming, sending 60fps from my game PC to Mac VDMX, using the built in NDI in windows caused issue. In order to get a smooth 60 fps feed over NDI from PC to Mac I had to send it from OBS on my PC and make sure the settings were explicitly 60fps in OBS. Then my Mac picked the feed up perfectly, whether in OBS Mac, VDMX, NDI preview; all NDI capable Mac apps. Was connected machine to machine with direct Ethernet cable.

Yes the first pic has full FPS, as NDI is not active (sorry is confusing as the name of the layer group is NDIOUT), but as you can see - the NDI plugin is not sending any video out.

The 20ish fps comes when NDI is active and sending as internal routing to NDI Monitor.
I tried running NDI in and out through OBS but there’s some weird bottleneck: as soon as I activate NDI input or output from any application (tried also with Madmapper, Synesthesia) the FPS drops like crazy (and again this is all internal routing), while GPU or CPU are not even under minimum stress (that said with an i9 10900k and 6800XT).

Might this have to do with NDI being now developped for M1 on OSX and not working well for Intel no more?

Are you sending NDI over a network or only locally on your computer? Syphon is better for local. NDI is better for network. There may be NDI limitations for local playback as that’s not what its designed to do. (imho).

I-ve solved the problem! NDI is a pretty GPU demanding process, and my GPU was installed on the PCIEx4, sharing that bandwith with an M1 drive, thus going at only X2… 3.938 GB/s instead of 31.508 GB/s, so heavly bottlenecked. Now no probs of fps on NDI at all. Thanks for support