I am having a couple of minor issues when using Vuo in VDMX.

I am seeing a white flash with certain Vuo files when running in VDMX. It doesn’t happen when running in Vuo directly & it doesn’t see to affect all files. The whole screen will momentarily go white and it seems some what random. It looks similar to this issue maybe: https://vuo.org/node/2197.

I am running Vuo inside of VDMX and occasionally it is getting into a state where the files don’t render properly. Some files render blank & others are missing certain components. It seems random as to when this happens, its possible a certain composition is killing something. Is it possible to restart the Vuo process inside vdmx without a full restart of the software? Running Vuo as a separate process causes vdmx to momentarily freeze when loading a new composition which isn’t ideal for how I am using it.

Let me know if you need anymore information

Can you send us a Bug Report from the Help menu so we can get a look at your full system specs, etc? This is usually the best way to report issues to us!

I had also a similar problem with white flashes. Are you using a “dragabble camera”?

I found that if I changed a dragabble camera to " Targeted Perspective Camera" it worked fine .

It looks like the issue being described here is reproducible, and looks like it is on the Vuo side of things. We passed on some notes written up about in case they want to update their 1.2.x branch to fix this, however, so far in our testing this issue doesn’t appear to a problem with the Vuo 2.0 beta – and we plan to switch over to that when that reaches its official / stable release point.

Ah, I was going to ask about Vuo 2.0… it’s getting interesting with some of the new nodes.

It seems like a big improvement in a variety of ways – we’d definitely like to encourage people to start trying it out, updating your compositions and sending the Vuo team bug reports.

Also please feel free hit us up on email if you want to tell us about your experience with / thoughts on Vuo 2.0.

I’ve just made an Anchor FX with Vuo and it works fine particularly if you combine it with layers position. The only downside at the moment is the lack of support for pop-up buttons in the Vuo UI (I think this is correct). Anyway here’s a screenshot for a simple Vuo Anchor FX still usable with a UI slider. 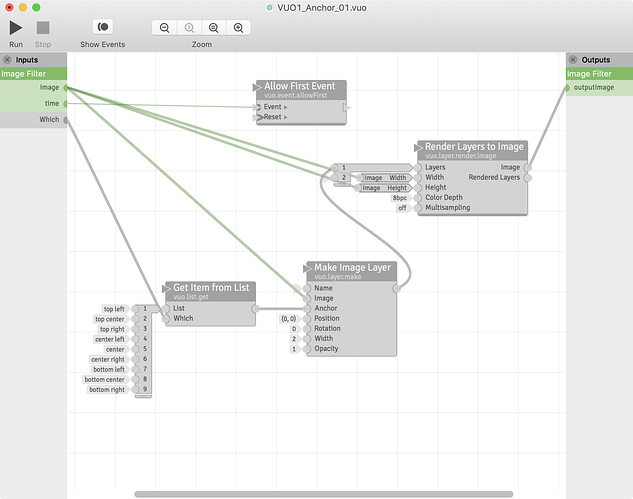