One of the new features in the latest update to VDMX is support for a new protocol that we have been working on in collaboration with several other developers in the real-time performance community.

OSCQuery is an extension to OSC that helps solve the problem of communicating the address space of messages that a piece of software like VDMX is prepared to receive. Using OSCQuery, applications can automatically share this information, making it possible for performers to sync parameters and collaborate in totally new ways.

Along with support for this new protocol in VDMX we have also released a handful of useful free / open source tools that can be used to help other OSC and MIDI capable tools take advantage of OSCQuery by creating template files that describe their inputs.

VDMX also includes a built-in OSCQuery Browser window that can be used to quickly browse and remotely control other systems:

A more in depth look at using the OSCQuery Client can be found here:

In this thread we’ll be posting more examples to help people get started with using OSCQuery in VDMX, and we’d also love to hear how you are making use of this new feature yourself, or any questions / problems that you have while getting set up.

There’s now a section in the documentation that features a lot of info on using OSCQuery, including how to use the built in “Interactive Web Interface” feature,
https://docs.vidvox.net/vdmx_oscquery.html

The MIDI OSCQuery Helper test app can be used to bridge any app that supports MIDI input with OSCQuery!

Here is a quick 1 minute demo of using it to load in an Ableton Live project, which is can automatically parse and publish for other apps to access:

Here is the more in depth version of that Ableton Live tutorial, 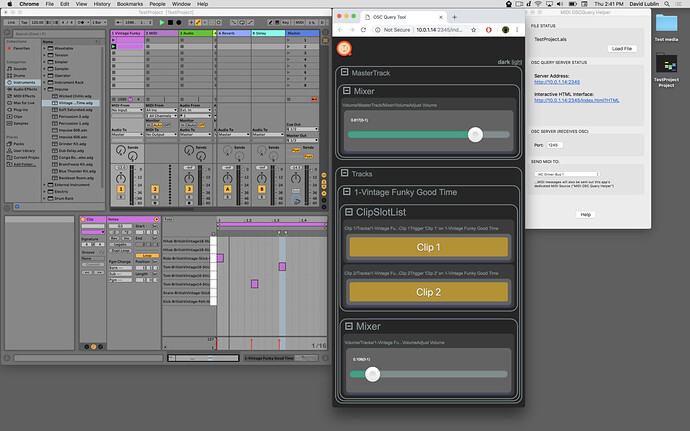 How to control an Ableton Live project from a web browser (and other...

The OSCQuery Protocol is a new specification that allows live performance tools to automatically communicate its parameters for rapid setup and improvisation between performers. Along with native support within VDMX here at VIDVOX we have developed... 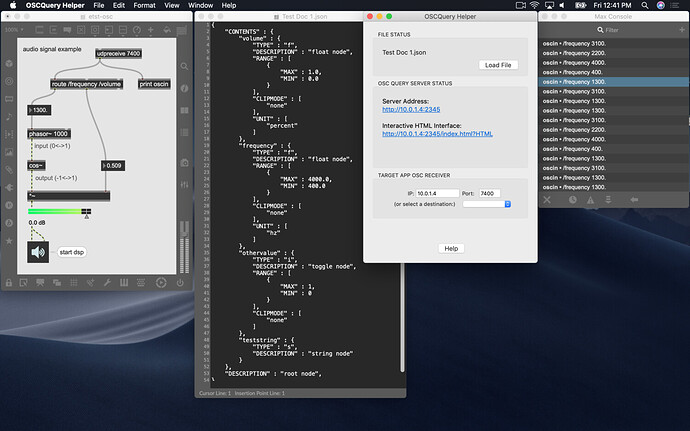 One of the most powerful tools for working with MIDI and OSC control data is Max, which is widely known for its easy to use interface for “patching” and working with data streams. While Max does not yet support OSCQuery natively, it is a great...

Here is a Japanese translation of the MIDI OSCQuery + Ableton Live tutorial!

How to control an Ableton Live project from a web browser (and other software) in about a minute_Japanese_translation.zip (409.4 KB)

Another OSCQuery tutorial, using the helper app with Processing, 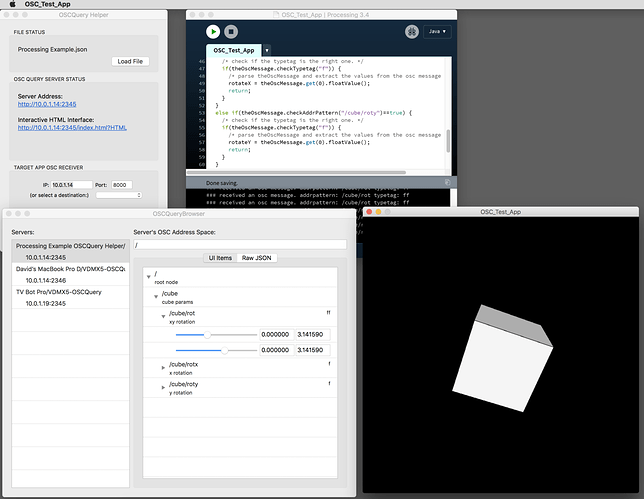 In our introduction tutorial for working with Processing and VDMX we examined how to manually configure sending OSC messages from VDMX interface items to control properties of a Processing sketch running in the background. For this follow up lesson...