Hi there! FFGL effects/generators aren´t loading on my new macbook. Have put them in a Graphics folder in Library, but no happiness.
They work in 32 bit Resolume 5, so are 32 bit.

Can you hit us up with a Bug Report from the Help menu?

Hi, just sent one. I put some other bundles in the folder, some I could see, some not. via the browser. But not my beloved 32 bit used-to-work FFGL Plexus, and not the Voronoi thing I put there now for testing. 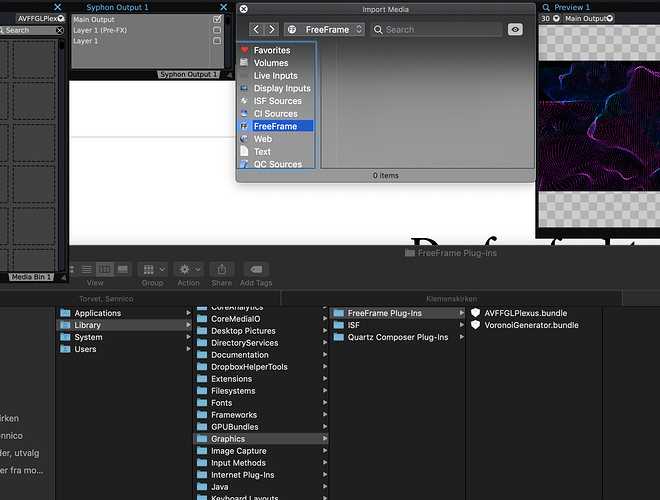 Hi,
I have the same problem: FFGL sources are not shown. I’ve tried with version 8.6.1.7 and everything works fine. Is there any way to fix it?
Thanks
Javi

So, one of the big changes in macOS is that Apple has started removing support for 32-bit apps and plugins; they started doing this with Mojave. During the early betas of Mojave we had run into some issues with this, so we disabled 32-bit FFGL in 10.14 and later to avoid any further problems.

It might be possible for us to get FFGL 32-bit working properly in Mojave, however when 10.15 is released later this year, it will become completely impossible for us to support them – the only real long term solution is for plugin developers to release updated 64-bit versions.
(or in the case of plugins that are no longer being actively developed, perhaps they can be open sourced so that others can continue the work in the future?)

Hi David,
But I’m using VDMX 8.7.1.0 in High Sierra 10.13.6
The FFGL Fx are shown correctly and are working perfectly, not the FFGL sources, of which only one is shown and I have several. Maybe VDMX downgrade is the best.
Thanks

In that case, as I requested of the original poster, please send us a bug report so we can have all of the information we need to understand the issue.