Wondering if anyone know how I can chromakey 2 colours with 2 different layers. I’m using a blue screen background and green screen suits. Is it possible to do both at the same time without rending something out first? Thanks!!

Maybe you can use this attached ISF, David made it for me to key out multiple colours on one layer. Use this one instead of the regular Chroma Mask, one for each color you’d like to key out.

My G… thanks so much for this. Will check it out tomorrow morning and let you know how it goes. Much appreciated

Just trying installing this. Put it in

and I stopped vdmx from opening?? Does it need the latest version or am I putting it in the wrong place? Any info would be grand!!

You can add multiple Chroma Masks to the Layer Effects. Set one to the green and the there to the blue.

I know, but I want to use 2 different sources for the two different chroma keys. I want one on the blue screen background and one for the green screen suits. Its a video version of this… 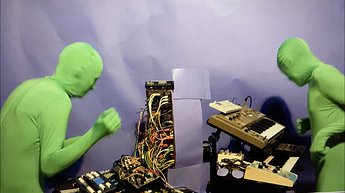 So i’m guessing any of those two locations should work. I used it back in 2017 and just checked it on the latest version so I would expect it to work on any version of VDMX since then. I don’t know why you would put it inside the app.

Maybe @admrobrts suggestions also works for your specific use case or system, in theory that is how i also thought it would work, but it simply doesn’t work that way for me. When I add multiple regular Chroma Masks on one layer, on all of my systems I’ve worked with, only ONE of them works, the alpha does not carry on to the next one. Even when set to multiply mask. I can’t remember David’s explanation for why this happens but he did then make that attached ISF for me to make it work, I don’t know why it isn’t included by default. Maybe they have updated the regular one since then and it works for others, but I tried it again now and I stilll can’t make it work with multiple regular Chroma masks. Perhaps its peculiar to only some systems.

Any way. With the attached filter I am able to key out both the green and the blue from videos like your example. If you put this in the right ISF folder and it still doesn’t work for you, probably get in touch with Vidvox.

Amazing. Thanks for the reply. Totally forgotten about the Graphics folder.

Had already tried multiple chroma masks but wasn’t having any joy. Will band the ISF in the folder and see how I get on. If I can get it going I will message David. Thanks again for your help.

Here is a very rough comp. Using your uploaded image (it’s very noisy so not the best to key)

The idea:
5 layers.
1: Top Layer your master shot with both elements keyed
2 & 3: Layers creating each alpha. Opacity set to 0
4 & 5: Replacement Layers with Layer Mask - source from the above alpha layers.

Thanks admrobrts!!
Will check this out and let you know how I get on. Thanks for your time on this