Hey everyone! I was a member of the old forums but haven’t been around in a while. Just want to get a developer’s point of view on Apple’s upcoming CPU transition. I’m trying to decide if I should get the 16" MBP with 5600m GPU to last through the transition, or wait and see what apple has in store. My question is, when do you you expect VDMX to run well on the new architecture? My initial thoughts is that we should wait to upgrade to ARM Macs for a couple years still… But I don’t want to spend $3500 on a laptop that will depreciate in value quickly after ARM, or not be supported in the long term.

Oh, im pretty curious of this too… My last mac just went into ashes so i guess i can’t wait for the new ARM ones anyway. I could make you a report if you want when i get it (it should be in around a month).

otherwise - had anyone already worked on VDMX with the 5600M gpu?

We got one of the ‘Transition Kit’ Mac Minis, and we are working on updating VDMX to run natively on both Intel and ARM machines as a universal binary. We’ll give some further updates with an expected ETA for this release once we get deeper into it.

Apple has said that the existing Intel machines will be supported at least for the next few years, and there are even some new releases with those chipsets still in the pipeline, so I think it is a safe bet to buy a new Mac now.

Beyond that, if you want my pure speculation, my guess is that Apple will start by replacing the lower power machines such as the Mini and the Macbook Air in their lineup like they did back in the PPC -> Intel switch. Another thought is that these last generations of Intel machines may have very high resell values down the road (if you keep them in good condition!) as there will eventually be a lot of demand for this hardware to run software that doesn’t make the jump to ARM.

Thanks! You thoughts are about in line with my thoughts. Thanks for your reply. Been loving VDMX since 2009-ish by the way. Thank you so much for all you’ve done!

Intel emmulation benchmarks just can’t be considered, i am wondering about FPS

So the first ARM mac is out with an M1 chip. Is there any update news?

Our official M1 Mini is due to ship mid December - we decided to wait for the 16 GB RAM model since our user base tends towards higher end machines.

If anyone is testing on the M1 machines, feel free to send us reports on email so we’ll have them lined up for when we get the hardware ourselves!

When you do make the port to Apple Silicon do you think we’ll get to run VDMX on an iPad Pro? Obviously with much more limited performance but it could be an interesting option for some projects.

Any feedback here on VDMX performance with M1 chip ? Thanks

Here’s the specs I tested: 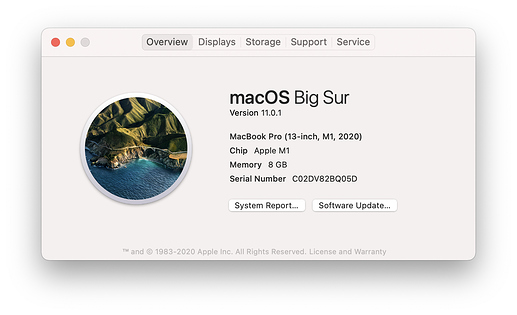 I was impressed. You’ll install VDMX and it will ask you in to install Rosetta. ISF shaders worked great. Mixing mp4s, Mov’s. // optimized video file worked flawlessly. I even triggered Synopsis selections an insane number of times and the Mac kept up.

I launched the VDMX Livid Ohm RGB template and added a syphon output. Using Syphon Simple Client, I was getting 3 fps at 1920x1080p60. If you turn off the 8 FX that are on the left and right side, the FPS goes up 60. 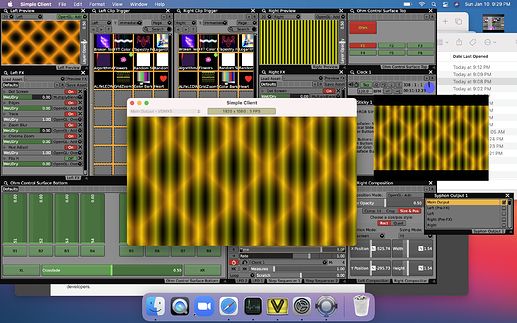 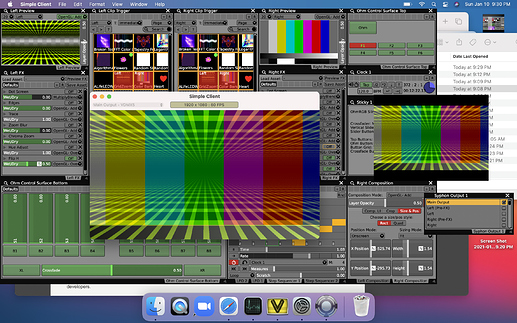 I never heard a fan and the laptop runs significantly cooler than an intel.

Short answer, would I use this laptop for VDMX – Yes, but would I BUY this laptop for VDMX – No. I would prefer a larger screen (16") or at least something with 16GB for other applications and integrations. Note, there are only two USB C ports, if one is being used for power, you’ll be using dongles for the rest.

Quite impressed tho. If they told me to keep this laptop I would use it for VJing over my older Intel MBP. 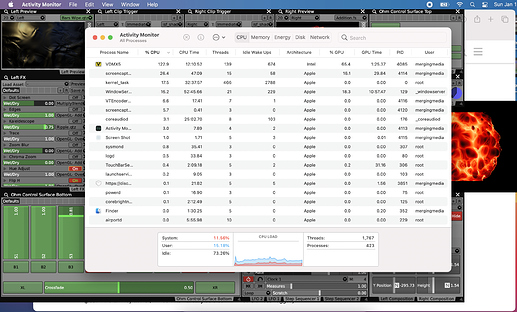 Cheers for that. Very promising and will be interesting to see how this will fair if/when VDMX is ported to a native Apple silicon app.

Thanks for posting a detailed update. Looking forward to testing out the future. I imagine the next version of pro’s 16/14 will be fantastic but the first gen sound like a significant upgrade

Hi David, what’s the feedback on the M1 mini?

Can anyone compare the performance of VDMX+Shaders on Apple M1 Silicon to Intel+AMD gear? For example, is it faster than a 2015 15" MacBook Pro+AMD GPU, but slower than a 2019 16"?

All I can say is that it is better to look at the specs rather than looking at the price and brand. It does not really matter if the one you are using a computer that has an unknown brand. What’s important is that it does the job and that you are comfortable using it. Aside from the specs and a the product itself, you should also make sure that you are taking good care of it and that you are not over using it. Make sure that it is well ventilated to for it to function properly. thank you

I don’t have both computers to compare, but I’m currently in a laptop limbo myself. I need an Macbook Pro upgrade, but I don’t want an Intel based mac if Apple is switching everything over to their chips. I also don’t want an M1 processor, but if the rumors are true about the M1X or M2, then I’m excited.

I also think it is safe to say that if Vidvox continues to develop for Mac only, that future versions of VDMX will most likely follow the path of these newer processors. I think it’s safe to say the same thing about other Mac applications as well. Adobe, Davinci Resolve, Madmapper. If apple goes all in with their silicone processors, I think it will be more likely that older Intel Macs will be forced to emulate newer applications. Right now, it’s the other way around until all of the software devs play catch up with the latest Mac swoop of changes.

All that being said, I’m hoping a M1X Macbook Pro drops later this summer. I’m usually against buying the “1st” of anything Apple, but my 2015 MBP is starting to show its age.

In exactly the same boat as @ProjectileObjects - have a max specced 2015 MBP and holding out for a M1X for the same reasons.

This is a real quandary, I have a full spec 15-inch, 2017 MBP which I would expect to last 7-8 years. But with Apple Silicon emerging like @ProjectileObjects I feel in limbo. Even tho my machine is capable (except for the sloppy Thunderbolt 3 / USB-C ports)… to use an EV term I’m suffering “range anxiety”.

I’ve been having a ton of issues with kernel task slowing down my 2020 MacBook Pro with a Radeon pro 555. It’s been super frustrating and the fans seem to kick up whenever I do anything that touches the graphics card. I think it’s just bad heat management on that generation. I need to do more work reinstalling, etc… but that’s such a drag.

I have an M1 Mac mini with 16gb ram that I’ve been playing with and out of frustration with my kernel task issues a gave my VDMX project a whirl on it and I was really surprised. Everything runs super smoothly, it’s a simple project but it didn’t even bat an eye at what it was asked to handle and I’m sure I can push it more.

I think with a small monitor and Bluetooth mouse and keyboard, this would make a great live performance system. I’ll be exploring the limitations and how far I can push it. I’m sure that some thing will make it choke. I’d totally recommend it for replacing a laptop. For that matter the 13” M1 MacBook Pro should offer similar performance.

Just wanted to contribute to this thread and share some results.

I’d say from looking into the M1’s a little bit more, that stick with the 16GB to avoid some possible headaches:

And:
https://barefeats.com/m1-versus-16in-macbook-pro.html
“The 16-inch MacBook Pro is faster than the M1 MacBook Pro in seven out of nine tests.”