Any way to dynamically change control of parameters with MIDI?

I’m looking for a way to dynamically change the control of parameters with a MIDI controller. I feel like it should be possible, considering the modularity of VDMX, but I keep running into roadblocks that prevent it from working.

I’ve tried using presets to map/unmap controls, but they’re tied to parameter values, so that would cause sudden changes of values and reduce flexibility. I’ve tried using the control surface, but that has a few issues that make it a dead-end.

Something like this is usually implemented in other programs so that you don’t have to have a dedicated control for everything. I’m hoping I’m just overlooking something!

Try mapping the on/off button of an effect to one of your MIDI controller buttons instead of the sliders. Then, inspect that button and click the “Val from Input” option in the Boolean Data Receiver panel. That ought to give you more button-like on/off control of your FX. If you already tried this and your buttons/sliders/etc. aren’t picking up MIDI, maybe there’s a problem receiving MIDI somewhere.

Hmmm, I think maybe there’s a bit of confusion here. My example above was mapping a MIDI controller button, not a slider.

I have no issue making MIDI connections between my controller and VDMX, the issue is with the way VDMX has implemented mapping them.

Oh, okay. Well, I guess I misunderstood the issue. Best of luck.

Hmmm, I think maybe there’s a bit of confusion here. My example above was mapping a MIDI controller butt

I’m starting to wrap my head around this and I have a few ideas that might work in three examples (I can think of off the top of my head).

There are a few ways to do this sort of toggle chain with OSCulator. For one, you can make a multi-button under a custom control surface and have it switch between mutually-exclusive buttons that send out their own MIDI or OSC commands to OSCulator (telling OSCulator which mapping presets to switch to). 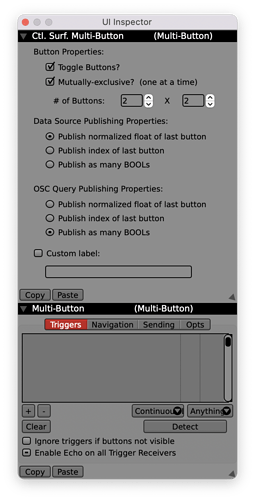 In theory, you could also use something like TouchOSC to trigger a change in presets, but it would add some delay.

Does this sound like what you are looking for?

Hey I’ve accomplished the same
Thing by doing the following:

Now you need to set up additional midi control to “trigger” the activation of those tabs. If you select the tab at the bottom
And open the inspector. You can assign a midi control there.

Oh yeah you’ll also have to map whatever it is you want to adjust to your custom
Control surface buttons, faders etc.