I’m planning to use VDMX to sequence an art exhibition which will have between 6-8 projections running at 1080p.

The cue list plugin will be used to sequence a variety of generative outputs, which will be shader and FX heavy.

Does anyone have any experience or tips for running this many displays?

I’m considering using a mac mini with an eGPU. In this case I was hoping that I could use 4 x DisplayPort (DP) outputs from the eGPU, and split each output over 2 x 1080p projections. However I’ve discovered that apple doesn’t support DisplayPort Multi-Stream Transport (MST), ruling out the use of MST hubs… I’m also not sure if using multiple DP Matrox DualHead2Go boxes would be able to split the outputs from the eGPU either? If not, this would leave the only option to run 6 projections, 4 from the eGPU DP outputs, and 1 x HDMI and 1 x TB3 on the Mac Mini.

After reading this guide from Vidvox (https://docs.vidvox.net/vdmx_gpu.html#notes-from-apple-on-using-multiple-gpu-systems-and-egpus). It seems as though this setup might cause potential bandwidth issues… as some data will need to be transferred from the GPU back to the mac Mini for the connected HDMI and TB3 displays (if I understand correctly…)

Are there any other options which anyone can suggest which doesn’t cost more than £2k?.. I also may have access to use 2 extra mac minis… so I could have 1 mac mini + eGPU (4 outputs), and 2 mac minis with 2 outputs each… so 8 in total. Would that potentially be a better way to go rather than attempting to achieve this all with 1 machine? In this case, I’m assuming I could make use of OSCQuery Client plugin to keep all instances of VDMX in sync. I will also be building a custom OSC controller using an arduino - I hope that I can get the arduino to be compatible with OSCQuery… but that’s for later!

A lot of my research is unfortunately telling me that a lot of these difficulties is due to limitations of OSX… VDMX is pretty much the last thing stopping me from swapping over to windows… so I do hope there is a solution out there somewhere!

Thank you for reading!

Check out AJA HA5-4K converter. It can be configured to convert a 4K HDMI signal to 4 x quadrants outputted via SDI so basically it acts like 2x2 video wall processor.

Pop 2 of those behind your eGPU and do some clever output mapping in VDMX or MadMapper and you’re good to go. Way more reliable than those crap Matrox boxes

but then you have to deal with SDI …I mean I love SDI but I have absolutely no devices supporting it. Don‘t know about OP.

Yup that’s really handy to know - wasn’t aware of the AJA HA5-4K - thanks for the suggestion! Although dealing with SDI isn’t that ideal - would need 8 x BM SDI - HDMI boxes so the costs would mount up fast. Maybe using 3 separate machines might be the best way if I do have access to them already?

Well I guess You have to check if the integrated graphics of mac mini is up the snuff for two layers of 1080p shader and fx heavy generative stuff. That kind of thing is definitely a job for a discrete GPU. 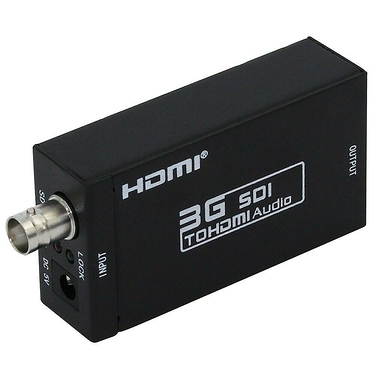 Yep that’s true! Hm they’re quite affordable actually - good to know that they’ve been reliable for you as well

I guess that’s a pretty decent solution! SDI cables can be way longer than HDMI cables and are also cheaper, right?

Yep I agree it seems like the best option the more I think about it. I can probably get away with 7 outputs as well which would mean I’d only need 1 x AJA HA5-4K box with 4 outs + 3 remaining eGPU outputs. Much more affordable solution than using a video wall controllers that’s for sure. I didn’t realise how superior SDI was as well so that’ll be ideal for installing in a large gallery.

Hello,
I work with hackitosh since 2012. Actually had one show with 6 HD output that went perfect.
Computer cost 1k approx, is silent and even manage 8 output …Gamer stuff…
Never let me down, they made art installation (15days non stop) and theater show…

I actually originally considered a hackintosh but was a little put off from hearing a few horror stories. It’s encouraging to hear about your success however - could you let me know about your build? Did you follow any specific guides? It would definitely be a more cost effective solution!

Sorry for the slow ‘official’ follow up, most of our notes are in the docs that you original linked to and I was quite curious to hear what people out on the front lines would have to say.

Thanks a lot for your input @davidlublin!

Your first point helps to clarify the ‘bandwidth’ problem. Definitely makes sense to avoid streaming raw images to the eGPU - I can see how pre-compositing and rendering on the built-in GPU minimises any potential bottleneck via TB3.

Is this still the case if the layers are comprised of only ISF generators and FX as well? The content will be purely generative and I won’t be using any movie files. I don’t think the built-in GPU of a mac mini would be able to handle rendering what I have planned for this - my 2015 macbook pro can hardly handle 1/4 of what I’ll be running through these 7/8 displays.

If that’s the case then I guess I’ll look into the murky waters of a hackintosh build…!

Is this still the case if the layers are comprised of only ISF generators and FX as well? The content will be purely generative and I won’t be using any movie files.

First off, for people who are reading this, when dealing with “basic” movie, the bandwidth limit isn’t a huge issue – we are really talking about for people who are pushing a lot of pixels around. You should be fine for a couple of 4k layers of HAP to use an eGPU.

Second, the use case of generative content (ie shaders, ISF) is the actual situation where you’d want to do rendering on the eGPU because it can be more powerful than your built-in mobile GPU and there isn’t a concern about bandwidth since you aren’t constantly streaming huge amounts of data over TB3.

The caveat is that if you use an eGPU to render generative content, AND you want to preview each of these layers on your main screen UI individually, these streams need to be sent back from the eGPU to your built in display, which is powered by your built-in GPU. For using movies, this compounds the bandwidth issue because, for example, you may want to preview a movie after FX have been applied. So, for each pre-composited layer / group you want to preview that was rendering on the eGPU, that is bandwidth used up sending video back. Again, this isn’t a huge concern until you are doing a lot of layers, and whether you’ll get better performance using the built-in or eGPU to do the rendering is potentially going to vary from project to project.

Let me also note that I often check barefeats for benchmarks,
https://barefeats.com/

Amazing thank you @davidlublin! Good news that the eGPU option should be suitable for my application.

Out of curiosity - how would VDMX handle a multi-GPU setup, with a hackintosh for example? As you need to select the GPU to do the rendering in VDMX, does that mean one GPU will handle 4 monitors while also streaming the rendered, pre-composited data to the other GPU which which handles the other 4 monitors? I’m assuming as it’s a PCI-e connection there wouldn’t be any bandwidth issues… but does that mean that you would need 1 powerful GPU for rendering, and the other doesn’t need to be as powerful as it’s just dealing with the monitors? Excuse my ignorance, I don’t really have any idea how multi-GPU systems work!

VDMX handles working with multiple GPUs in one system the same way that it does with eGPUs – when possible, in the VDMX preferences under Rendering you’ll see a list of GPUs that can be used for rendering. Only that GPU will be used for doing all of the processing, and we recommend you use this to power your main display. So yes, in a sense you can have one powerful GPU, and the others don’t need to be as powerful, but we do strongly recommend using matched (at least by manufacture) GPUs whenever possible.

The big difference between multiple GPUs in a single machine vs having eGPUs is the amount of bandwidth you have. Thunderbolt 3 is essentially equivalent to PCI 4x, a mobile GPU is typically PCI 8x, and desktop GPUs are typically PCI 16x. I think these details are covered in the VDMX / Apple documentation notes.

We never test on Hackintoshes so I can’t tell you how this works on those systems.

Well had some headhache at the beginning but now no more…
I had many, actually a simple i5 6 core with radeon 580 (2) and bunch of ssd.
You can find better GPU but mostly the best is to stick with something apple use so radeon no Nvidia. Also some versions work better, many out of the box, they also use them in macpro.
If you want i can send you the instalation key, it is 8g approx but will be only for my specifik build so it may change a bit if part is different.
Otherwise there are people in England who sell hackintosh with flashed motherboard, i’ve us them for a theatershow that went for many representation without a problem. They also had good service. it would cost 1k for the base then you can had GPU
If you like send me a private message and i send you the infos. … .