There are a few ways I can think of off the top of my head, but I’d say it depends on what style of visuals you’re going for.

Say you have two computers with the same video clips on them, you can use OSC cues over network to trigger the same clips at the same time. You can even use OSC Query to make a breeze of syncing up various OSC controls across multiple machines or applications.

Another way is to trigger clips on one computer and send the same output through NDI over Gigabit ethernet to the other computer. There will be a little bit of latency depending on your network, but you can compensate for that on your sending computer by adding a little bit of video delay FX to your master output (matching both computers).

Another way similar to the NDI method is to send over HDMI and use a low latency UVC USB 3.0 capture card / device.

You can Sync VDMX cues between multiple computers over timecode, abelton link, OSC, etc. if you want to pre-setup everything in a cue list on both machines.

The another question is, why two machines? Do you need two machines or is there HDMI splitters or duplicating hardware that can do the same thing without another computer?

Maybe you could speak more on the setup / workflow / and process that you’re trying to figure out.

thanks 2 computers since I only have two hdmi outputs per computer (and I must go out to 4 projectors). I will study your answer. We will talk soon!

Or you can get something like a TripleHead2Go or DataPath to go out to more projectors.

Can you confirm the set up. Do you need 2 outputs or 4 outputs? If you only have 2 outputs but need 4 projectors to cover the space you could just use a couple of HDMI/SDI splitters. Set the projectors up as ABAB and you can make it look as if an object moves seamlessly across the 4 projectors. For most of my jobs 2 channels with a couple of 4 way splitters will give you enough flexibility to cover large rooms. 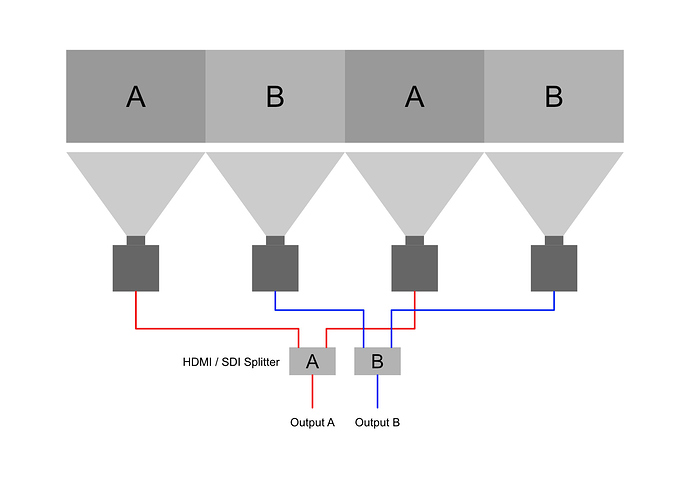